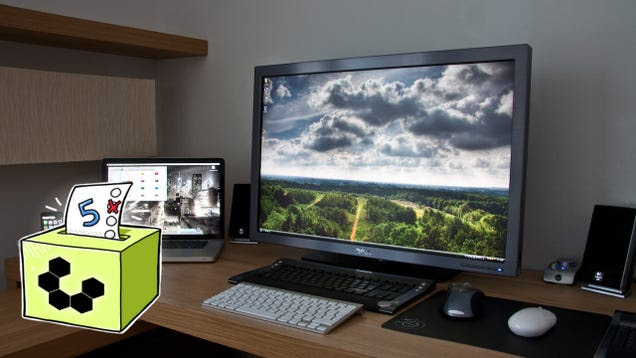 You don't have to break the bank to get a great display for your computer. Large, high-resolution monitors are more common—and more affordable—than ever. This week we're looking at some of the best computer monitors that offer screen size, features, and great image quality without a huge price tag.
Earlier in the week we asked you for your favorite budget-friendly computer monitors—less than $400, preferably—and you offers tons of great suggestions that were at that price point and, of course, way below. Contrary to our best overall computer monitors from a few years ago (which we're planning to update with new model numbers and links, since we don't think the top five would change if we re-ran the poll), this time we wanted to talk displays that may not cost more than the PC you're connecting them to. Here were your five favorite nominees, in no particular order:

Shopping for monitors can be tricky. If you have money to spend, you can go all out, but if…Read more 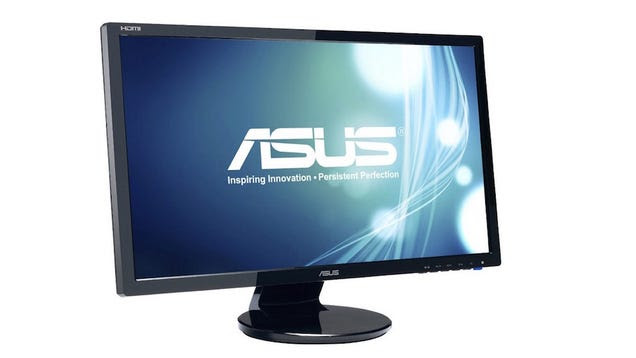 The Asus 24 inch (technically 23.6") VE247H TFT LED-backlit LCD display is a pretty decent bargain, coming in at around $160 at Amazon (available this month with an additional $20 rebate, and often on sale from other retailers around the $150 mark). It's full HD, with a native resolution of 1920px by 1080px (60hz) and 16:9 aspect ratio. It packs DVI-D, VGA, and HDMI inputs, a pair of speakers (with a headphone jack for private listening), 2ms pixel response time, and a tilting monitor base that lets you adjust the angle just a bit (although it's not a full tile/swivel base.) All in all, it's an affordable, no frills 24" display that offers great picture for an affordable price.

Amazon.com: $158.03
Buy now  510 readers bought this
Those of you who nominated the VE247H said similar things—it's not the most feature rich display, but it comes with the important things you'd want, and it's affordable. Many of you pointed out you have this display in multi-monitor setups, and with a little searching you can find deals on the display that brings the purchase price down significantly from its MSRP. The ability to connect your computer to it via DVI-D, HDMI, or VGA (or connect multiple devices to the same display) is a nice bonus too, and the display's picture-in-picture mode lets you see multiple inputs or switch inputs easily. It's not a perfect monitor though—some of you noted it's not the best for color reproduction, and others have had lighting issues. Others noted the built-in speakers aren't very good. If you're looking for a similar model that's just a little larger, the 27" Asus VE278Q-P is another great option, and only $267 at Amazon for all the same features (and a few more) with a bigger display (that earned a good number of nominations on its own!) You can read more in its nomination thread here. 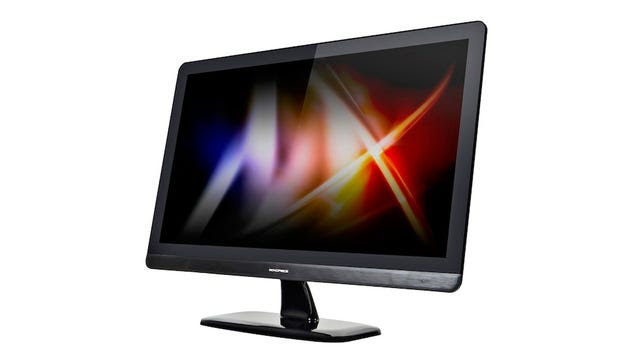 The Monoprice 27 inch IPS-Zero-G display is one of our favorite affordable alternatives to expensive big-screen displays, and full disclosure, I nominated it because I own one myself. It's a great IPS panel, albeit on the expensive end of our roundup at around $350 direct from Monoprice (although they're often on sale). That 27 inches of real-estate give you a native resolution of 2560px by 1440px (60hz) at 16:9 aspect ratio. It's a little short on the connectors though, and only supports DVI-D and VGA inputs, although you can have them both connected at the same time and switch between them easily. 6ms response time, a tilting base (although again, not a tilt/swivel base), and a super-thin and light body with a glossy (thanks to an applied laminate, not glossy glass, so it's not a glare magnet) front panel and aluminum trim round out its features. If you're willing to spend a bit more to get more space to play with, it's a great 27" model that's more expensive than some of the import displays we've mentioned before, but cheaper to have shipped and available from a retailer you can work with—and that boasts a 5-dead pixel warranty for a full year.

Three Cheap but Awesome Alternatives to the Apple Cinema Display

Whether you're a fan of Apple or not, you have to admit, they make some of the most beautiful…Read more
Those of you who supported the nomination noted that the display is actually an LG panel inside a Monoprice-branded shell, so you get a nice piece of glass for your money. What it lacks in input options (and one of you noted that DVI-D is compatible with HDMI and other inputs if you buy an adapter) it makes up with its slim form factor, thin bezel, and great brightness and color thanks to that IPS panel. Of course, if you're looking for a full tilt-swivel base, a slightly smaller bezel, and more input options, you can upgrade toMonoprice's 27" IPS Glass Panel Pro (#10489), which adds a few bells and whistles, moves the controls to the bottom of the display instead of the back, and adds HDMI and DisplayPort as input options. It'll run you more though—around $480, which puts it out of the price range of this roundup, but it's a great option if you want a more robust display that offers the same size and style. You can read more about this one though in its nomination thread here.

Total perfection may be elusive, but you can get pretty close with this 27" IPS-G LED Monitor…Read more monoprice.​com 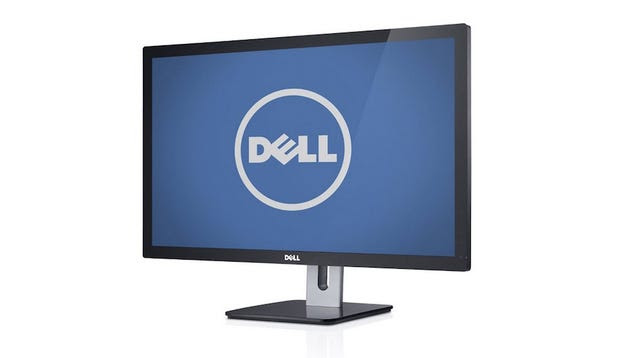 Dell has a history of making great, affordable displays, and their 27" S series S2740L IPS is no exception. It'll set you back $300 at Amazon, packs edge-to-edge glass on the front, and a native resolution of 1920px by 1080px (60Hz) and 16:9 aspect ratio. You can connect your computers (or consoles) via DVI-D, VGA, or HDMI, and the display has a pair of USB ports as well just as an added bonus (although they're on the back and pointing downward, so not the easiest to reach.) The 7ms pixel response rate is reasonable, and the display base is another tilt model (although again, not tilt/swivel) that's easy to position around your desk. The bezel is thin, and while the glass is glossy, you shouldn't have a problem unless you're in a bright environment.

Amazon.com: $279.99
Buy now  247 readers bought this
Those of you who nominated it pointed out that while it's not a perfect display, it does offer a ton of real estate for a great price. For one, the glossy screen could be a turn off for some people in bright environments or who just prefer matte displays. This is probably the biggest complaint we've seen about the panel too—the reviews at Amazon echo this: The front glass looks great, but a tiny gap between the actual screen and the back of that glass combined equals some serious glare and reflections some people can't get past. However, dimmer environments or users with no direct light note it's not an issue, and love the color reproduction and image quality. Otherwise, the 1080p display on a 27" panel could be a turnoff for people looking for 1440p to go with their 27 inches. Even so, The S2740L is an energy sipping display that won't break your budget, and comes with a one year warranty that includes any dead pixels. Read more in its nomination thread here. 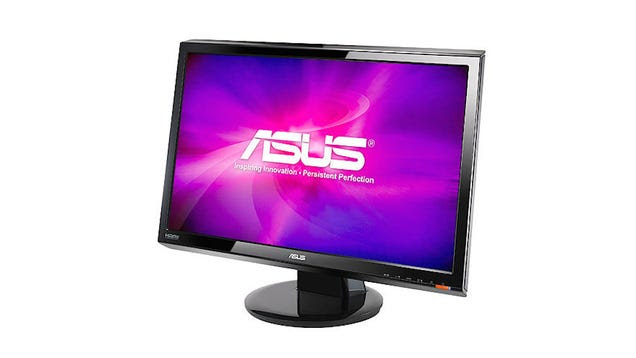 Asus's 23-inch VH238H TFT LED display was popular in the call for contenders thread, partially because it's a reasonably sized display at a bargain price, only about $160 from Amazon. If you don't need that much screen real estate, plan to build a multi-monitor setup, or just want a budget-friendly 1080p screen, this is a great option. It supports 1920px by 1080px (60Hz) native resolution at 16:9 aspect ratio, 2ms response time (thanks to Asus' Overdrive technology, which is great but can also result in inverse ghosting, an issue with Asus displays—including the ones earlier in this roundup), and your choice of DVI-D, VGA, and HDMI inputs to choose from (or connect multiple sources to.) Like other Asus panels, this one includes built-in speakers, although they're not terribly good. There's also a headphone jack for private listening, and a standard tilt-adjustable stand.
Those of you who nominated this model pointed out that it's particularly good in multi-display setups, saving space but offering tons of real estate when connected in double display setups or even triple monitor gaming rigs. More than a few of you pointed out that you have these displays connected to your computer on one end and plugged into a gaming console or another system with another input, and both the size and the price are perfect for you. You can read all about it in its nomination thread here.

Make the Most of Your Multiple Monitors in Windows

The price of extra monitors has fallen steadily over the years, quality has risen, and Windows is…Read more 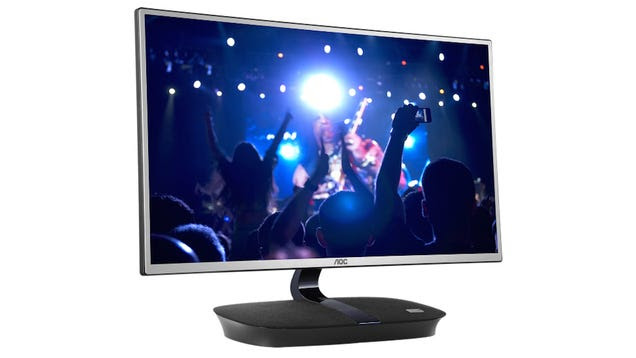 This AOC 24-inch IPS display will set you back $200 at Amazon, but also packs a pair of Onkyo speakers in that elevated base that sound much better than most you'll find in a display. That said, you're probably not buying a display for its speakers (nor should you), so you'll be pleased to know this 24" panel sports full HD, with a native resolution of 1920px by 1080px (60Hz) at 16:9 aspect ratio. The bezel is remarkably thin, and the display even comes with an MHL cable for charging your mouse, smartphone, or other low-power device right from the monitor. Its 5ms response time is solid, and for your money you get two HDMI inputs and a VGA input (no DVI port, for those looking for one). The base, since it includes those speakers, is tilt-adjustable only.

Amazon.com
Buy now  60 readers bought this
Those of you who nominated it pointed to its super-thin stature, noted that the panel has great viewing angles (thanks to it being an IPS display), and it being priced really nicely for an IPS. The addition of MHL is a nice touch, and even if you don't use the speakers, it's still well priced and looks great. It also doesn't hurt that AOC includes a 3 year warranty with its panels, which is especially useful if you run into dead pixels or defects after you've owned it for a while. Between the nomination thread, reviews at Amazon, and comments elsewhere on the web, this is a beautifully designed display that won't break the bank—and it'll look nice on your desk once you have one. You can read more in its nomination thread here.
Now that you've seen the top five, it's time to put them to an all-out vote to determine the Lifehacker community favorite:
What's The Best Budget Computer Monitor? (Poll Closed)
Total Votes: 2,749
Comments (0) Create Your Own Poll

This week's honorable mention goes out to the Seiki SE39UY04 39" 4K Display, which will set you back $340 at Amazon, which puts it at the high end of our roundup, but it's still extremely affordable, especially for a 4K display. That means its native resolution is 3840px by 2160px (albeit at 30Hz, which makes things like building a 4K gaming rig a little complicated), which means you get plenty of real estate for just about anything you might need to work on. You can read more in its nomination thread.

Can You Win When Disputing Accurate Credit Report Items?